EXPEDITIONS
PROGRAMS
WAYS TO GIVE
OUR DIFFERENCE
ABOUT US

Photograph (above) taken by Scout Sorcic

"On this course I have experienced challenge, hardship, fun and best of all, achievement. Because after all the paddling, rapids, mosquitoes, flies and heat, you are left with that sense of accomplishment, that you have gotten through it and you're still standing strong." Ujaiah Cunningham - Outward Bound alumnus

Whether by frothy white water or by navigating rock canyons, discover the wonders of Southern Utah and find more in you than you knew was there.

For either 15 or 22 days learn the basics and the fine points of managing a paddle raft through some of the best whitewater in the West. Spend your days taking control of the guide paddle and steering your crew through rapids while learning the geology of the local area. Spend your nights camping under pristine, star-filled skies. Then, trade your river shoes for hiking boots and backpack through the Utah mountains. In this section, you’ll learn basic travel and camping techniques. The high alpine environment is home to many native species and animals with amazing views of the surrounding Moab valley.

NOTE: This course requires that students be fully vaccinated against COVID-19 to attend. For questions regarding this policy please see this page or call us at 866-467-7651.

For detailed information on course availability statuses and what they mean, click here.

APPLY NOW
This means a course has several open spots and is actively processing applications.

APPLY NOW – Almost Full
This means there are three or fewer currently available spots left on a course. To secure your spot click Apply Now to begin an application!

JOIN WAITLIST
Once a course has reached capacity, three waitlist positions become available. To join a course’s waitlist, click “Join Waitlist” to begin the application process. A $500 deposit is required. This $500 deposit includes a $150 non-refundable application fee and a $350 tuition payment. The $350 tuition payment is refundable only if you cancel your waitlist application or if an open position does not become available. If a position does become available, the applicant will be applied to the open position and the Application and Cancellation Policies of the Regional Outward Bound School will be followed, including forfeiture of the $500 deposit if you cancel 90 days or less prior to the course start date.

Waitlist applicants are encouraged to complete all required admissions documents while awaiting an open position. Positions may become available up to two weeks prior to the course start date. Applicants may only apply to one course. We recommend applying to a course with open positions instead of a course that is accepting waitlist applications. If you have questions, please call 866-467-7651 to speak with one of our Admissions Advisors.

CALL TO APPLY
This means a course is very close to its start date. Although it is unlikely to secure a spot this late, you can call the National Admissions office at 866-467-7651 to discuss your options.

COURSE IS FULL
When a course has reached maximum capacity, meaning all spots and the three waitlist spots are occupied, a course will read “Course Is Full.” This means applications are no longer being accepted.

CLOSED
As a course nears its start date, the availability status may read “Closed.” In this event, a course roster has been finalized and applications are no longer being accepted or processed.

Are you ready to take a journey that will change your life? You won’t look at day-to-day drama the same way after you’ve conquered a high mountain ridge, made a boat obey your command in windswept waves or slept under the stars watching bats swoop overhead. Joining an Outward Bound expedition changes you. Your crew, your Instructor, your route and your adventures will have a profound and lasting impact on you as you rise to meet exhilarating natural challenges in some of the country’s wildest places.

After you come home, many of the character, leadership and service traits you uncovered on your expedition stay with you, helping you navigate your daily life with more resilience and success. 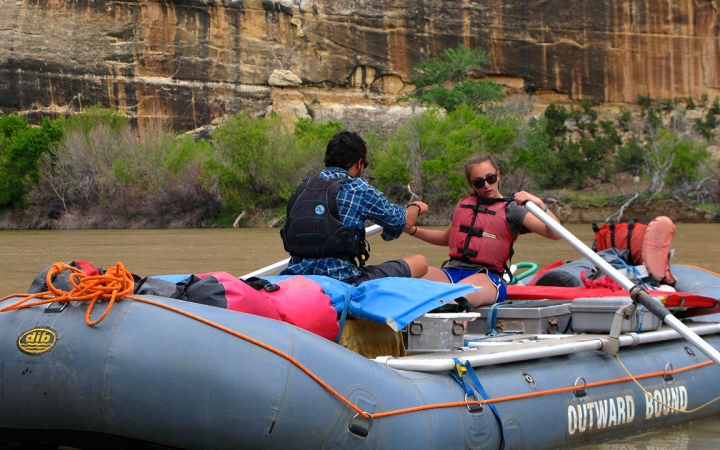 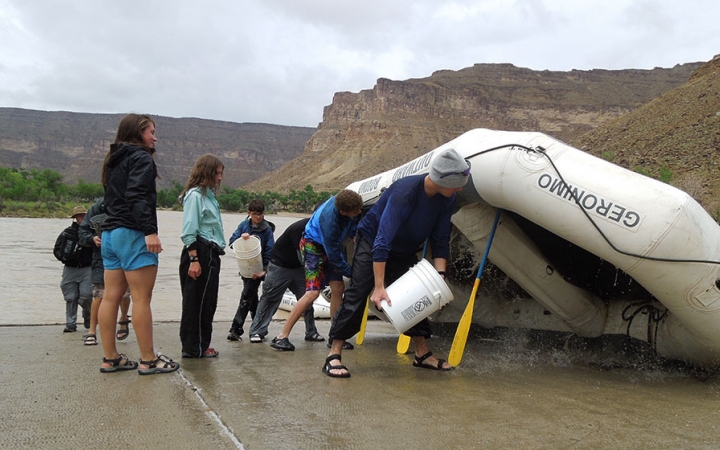 Each day on the river is spent learning to recognize and navigate various obstacles and hazards in the river and how to anticipate the forces of the current from far enough upstream. Students work to become a team, coordinating spacing and paddle strokes. Each student will have an opportunity to be the captain of their raft and practice new skills as they maneuver through adrenaline-filled rapids and flat-water sections.

In some places, the canyon rims rise thousands of feet above the river, enclosing participants in a remote world of rushing water, delicate ecosystems and unbelievable beauty. Most courses get the opportunity to take day hikes away from the river and up to the canyon rim. These hikes provide stunning views, a change of pace and often the chance to see Native American archeological sites, petroglyphs, pictographs and strange but remarkable geological formations.

The course begins with lessons in basic travel and camping techniques. Along the way, students learn Leave No Trace¨ techniques, map and compass navigation, camp craft, and get a feel for the human and natural history of the area. Students backpack in the canyons and out across the mesas, camp on vast expanses of desert slickrock and stop along the way to explore amazing ruins and interesting geology. Most importantly, students get to spend time in an incredible area of the desert, sleep under the stars, feel the sunshine on their face, and watch the sunset over this simple but magical landscape.

Service to people and the environment is a core value of Outward Bound and is integrated into each course. Participants follow Leave No Trace ethics as service to the environment and do acts of service while leading and supporting fellow participants. As they see the impact of their actions firsthand, students develop a value of service and transfer this desire to serve their communities back home. Past projects have included working on a goat farm, building trails, cleaning trash and debris from natural spaces, working with a local community garden and removing invasive species.

In order for profound learning to take place, there must be time to reflect on the experience. Weather and time permitting, Solo provides an important break from the rigors of the expedition and gives students the opportunity to reflect on their Outward Bound experience. Many students use this reflection time to make decisions about their future, journal and enjoy the beauty of their surroundings unencumbered by the constant external stimulation of modern life. Solo is that opportunity, and that time can range anywhere from 30 minutes to 24 hours or more, depending on the length of the course as well as the competency and preparedness of the student group.

With all the food, skills and supplies they need, participants are given a secluded spot to reflect alone and are monitored by Instructors at regular intervals, as safety is always a top priority. Students find that Solo provokes profound and powerful learning in a short period of time and often becomes one of the most memorable parts of their Outward Bound experience.

Whether on a 15-day course or an 22 day course, all Outward Bound expeditions are focused on building character and leadership skills.

On longer courses, Instructors progressively hand over more of the decision making and leadership of the expedition to the crew, allowing each person to test the new technical and interpersonal skills they’ve learned. Through the dynamics of an evolving group setting, students have more freedom to investigate who they are and how they want to develop personally. All along the way, students experience a wide variety of some of the most beautiful wilderness in the US.

The La Sal Mountains rise dramatically out of the desert, towering 9,000 feet above the surrounding canyonlands and the sporting mecca of Moab. The La Sals are known for their groves of aspen, rich amount of wildlife, high summits and incredible views overlooking Canyonlands and Arches National Parks and the Four Corners area. Hidden lakes dot the landscape. Peaks in the La Sals range from 10,000 feet to just under 13,000 feet. These regions are within the ancestral lands of the Núu-agha-tʉvʉ-pʉ̱ (Ute) nation.

Desolation/Gray/Labyrinth Canyon on the Green River

Surrounded by the Tavaputs Plateau and bordered by the Uinta and Ouray Reservation on the east, the journey on the Green River begins in Desolation Canyon near Sand Wash. Throughout the canyon, there are spectacular rock formations, ancient Native American archeological sites and abandoned ranches including McPherson Ranch, once frequented by Butch Cassidy's Wild Bunch. The tiered rock walls of Desolation give way to the earthy bluffs of Gray Canyon, creating a striking contrast that characterizes the next 25 miles of the journey.

Shifting to canoes, you’ll continue your journey down the Green River through Labyrinth Canyon, where the river dives deep into the pink sandstone of the Navajo Formation which characterizes southeastern Utah and the Canyonlands area with narrow winding side canyons, orange Wingate cliffs, pinnacles and ledges. These regions are within the ancestral lands of the Núu-agha-tʉvʉ-pʉ̱ (Ute) nation.

"On this course I have experienced challenge, hardship, fun and best of all, achievement. Because after all the paddling, rapids, mosquitoes, flies and heat, you are left with that sense of accomplishment, that you have gotten through it and you're still standing strong." Ujaiah Cunningham - Outward Bound alumnus 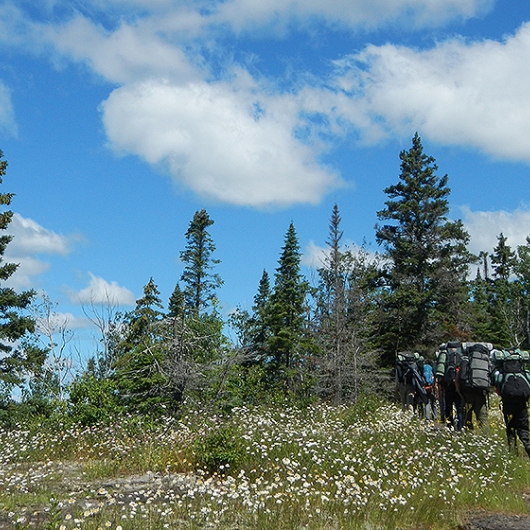 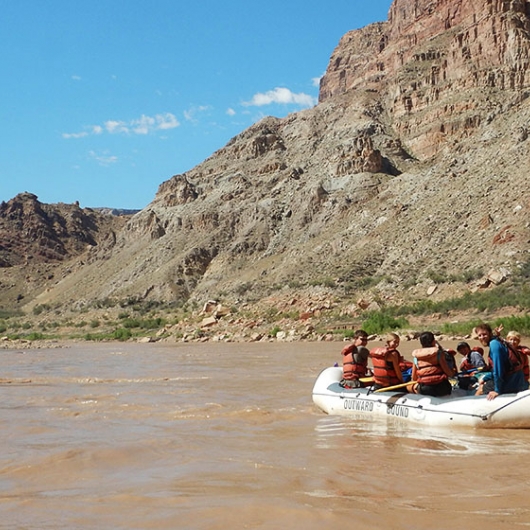 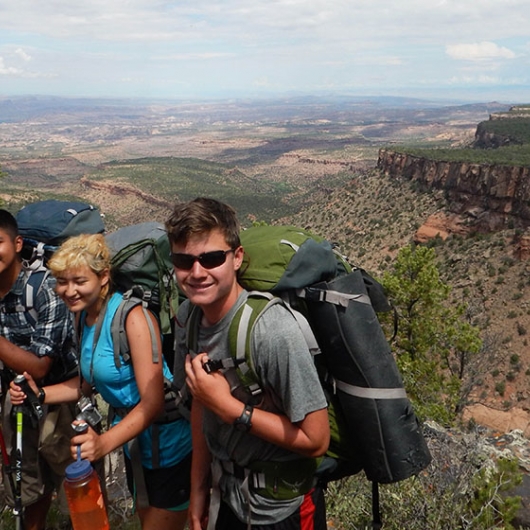